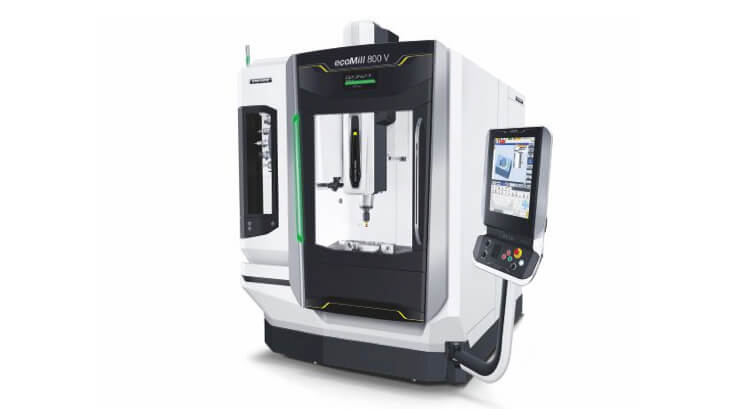 Hallam’s foundry is at the core of its business, producing around 20,000 aluminium castings per week from 10 die casting machines. Established in 1968 it now produces parts for a wide range of applications including industrial and domestic air conditioning systems, office furniture, DIY equipment, lighting and computer products. As part of its service, the company carries out powder coating and assembly operations to deliver a finished product to its customers. Hallam has considerable skill in die casting technology and uses this in the development of products and processes to produce prototypes and ensure their manufacturability.

To expand its capabilities the company was looking for a machining centre which could be used for extra operations on die cast parts, such as drilling and threading, and which would also be capable of manufacturing die casting tools. Colin Woodruff, Operations Manager at Hallam says, “We chose the DMG MORI CMX 800 V with 4th axis unit as it had the flexibility to finish machine castings and cut mould tools. We looked at machines which would have been a little faster for secondary machining operations on the die cast parts, but they did not have the power and rigidity necessary to cut core and cavity features in H13 tool steel. During a demonstration the DMG MORI machine achieved very high metal removal rates as well as very fast rapid traverse speeds, making it ideal for our application.  Additionally, DMG MORI has a good reputation for build quality and reliability.”

Previously, Hallam subcontracted its tooling and historically the lead times were around 6-8 weeks. Now, with the CMX 800 V, including heat treatment, tools can be completed in-house within around 2 weeks and at significantly lower cost. Colin Woodruff adds, “We are adapting to a changing industry where batch sizes are smaller. The CMX 800 V is opening up new possibilities and markets as it enables us to be competitive through lower tooling costs together with the flexibility of making much smaller batch sizes from 10 up to 400.” The technology in the machine gives some further advantages in toolmaking. Holes and NPT threads can be produced with circular interpolation making them far more accurate and, with NPT threads, deliver naturally leak proof connections for tool cooling.

Hallam uses its SolidWorks and CAMWorks CAD/CAM systems to work closely with its clients, considering details such as shrinkage, undercuts, venting and draft angles to ensure parts can be manufactured while, at the same time, producing prototypes, designing the tool and producing CNC programs for the CMX 800 V. The system is also used to design and manufacture fixtures to hold multiple parts on the machine’s 4th axis. Colin Woodruff says, “As well as tool manufacture, we need to finish machine features on the castings we produce. The trunnion arrangement we have on the 4th axis enables us to load multiple parts within the 800mm capacity of the machine. Typically cycle times are around 9 minutes and we can change the fixtures to a new part in under 20 minutes. We run the machine 24 hours per day and it is slowly taking over from the traditional methods of finishing parts.” The speed of the machine enables the finishing of around 550 sets of parts in one week which would have previously taken 1-2 months. Colin Woodruff continues, “It can take up to 13 different processes to finish a casting such as drilling, tapping, milling, fitting Helicoils and powder coating. With the DMG MORI machine most of these processes can be done in one operation, eliminating errors, reducing handling and labour content and dramatically shortening lead times.”

Workforce development is important to Hallam and the new DMG MORI machine has made a valuable contribution in this area. The company has four apprentices studying at the Advanced Manufacturing Research Centre (AMRC), where DMG MORI is a Tier 1 member, including Adrian Salatowski who won a Special Recognition Award at the AMRC Apprentice of the Year Awards 2017. Colin Woodruff says, “The apprentices love the new machine and equipment we have invested in. It has engendered a positive attitude amongst our employees and the new technology we are deploying will enable us to attract even more highly skilled and motivated people, when they see the confidence we have in our company’s future.